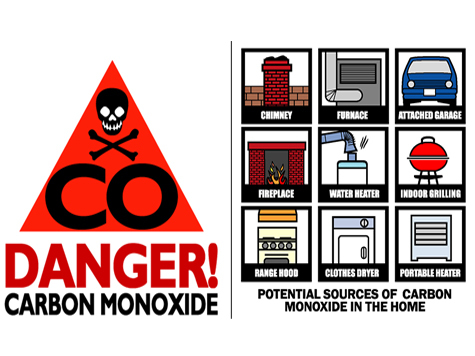 CARBON MONOXIDE POISONING – You can’t see, taste or smell it but it can be deadly

Any fuel burning appliance in your home can produce carbon monoxide, this is usually expelled through the flue or chimney. However, if something were to go wrong, there is the potential for this dangerous gas to enter your property.

WHAT IS CARBON MONOXIDE? (CO).

Carbon monoxide (CO) is a poisonous, colourless, odourless, and tasteless gas. CO is produced by incomplete burning of natural gas and any other material containing carbon such as oil, coal or wood.

When CO is inhaled into the body it combines with the blood, preventing it from absorbing oxygen. If a person is exposed to CO over a long/even a short period, it can cause illness and even death.

Nobby Kleinman from Money Rules knows the dangers of carbon monoxide poisoning all too well. He says: “One day. my partner passed out in front of me for no apparent reason and I needed to call the ambulance. When they arrived, the first thing they said they noticed when they walked into the house was the overwhelming smell of gas, although we hadn’t noticed anything. They ended up resuscitating my partner and taking her to hospital for an overnight stay.

“When a plumber visited to inspect the Vlacan Quaser heater, he immediately disconnected the gas and disabled the heater. He told us the readings were at something like 14,000 when it should have only been around 100, 1,000 or a much lower number. We had to leave the doors and windows open for a whole day with exhaust fans going to extract all possible pockets of Co2.

We loved our Quaser, but had to replace it with another brand. It does the job, but it doesn’t seem to be thas as well functioning. We couldn’t smell the CO but we definitely recommend that anyone with the older style should immediately have an inspection for a reading. The danger with CO is that it sends you to sleep and you never to wake again.”

Firefighters, when talking about CO in smoke say it takes only three breaths, the first you don’t know there’s a problem, the second you might suspect there’s something wrong but by the third, you are unable to take any action.

The symptoms of carbon monoxide poisoning aren’t always obvious, particularly during low-level exposure. The NHS has advised the following information.

A tension-type headache is the most common symptom of mild carbon monoxide poisoning. Other symptoms include:

The symptoms can gradually get worse with prolonged exposure to carbon monoxide, leading to a delay in diagnosis.

Your symptoms may be less severe when you’re away from the source of the carbon monoxide. If this is the case, you should investigate the possibility of a carbon monoxide leak and ask a suitably qualified professional to check any appliances you think may be faulty and leaking gas.

“The longer you inhale the gas, the worse your symptoms will be. You may lose balance, vision and memory and, eventually, you may lose consciousness. This can happen within two hours if there’s a lot of carbon monoxide in the air.” – Aodhan MacCathmhaoil, waster.com.au

Long-term exposure to low levels of carbon monoxide can also lead to neurological symptoms, such as difficulty thinking or concentrating and frequent emotional changes – for example, becoming easily irritated, depressed or making impulsive or irrational decisions.

Breathing in high levels of carbon monoxide gas can cause more severe symptoms. These may include:

Around 10-15% of people who have severe carbon monoxide poisoning develop long-term complications.

WHAT TO DO IF YOU SUSPECT CO POISONING

WHAT CAN CAUSE CARBON MONOXIDE TO LEAK?

The main causes are:

Faulty appliances in your home can lead to CO poisoning. Get your appliances checked regularly to avoid this.

Chris Tomlinson, Operations Manager at Urban, says: “Carbon Monoxide regulations are in place, and are the responsibility of landlords and tenants to ensure that these are working accordingly. However, as tenants we can ask ourselves the following questions:

If one of these is present, chances are that there might be a leakage, and it’s time to call an expert.”

A good quality carbon monoxide detector will sniff out the danger and let you know when there’s carbon monoxide in the air. But there are plenty of ineffective alarms on sale – in fact, a fifth of all the models tested by Which? were unreliable and dangerous. The potentially deadly CO alarms all claim to have passed the relevant EU safety standard, EN 50291. But repeated failures in during testing lead Which? to suspect the authenticity of these claims.

CO alarms have an expiry date: many of our customers do not realise that the sensor in a CO alarm will have a life expectancy of around 7-10 years. After this point if you replace the batteries the alarm will have power, but it won’t detect anything. This is another reason why we believe that sealed battery alarms are the best option. The battery and sensor share the same life expectancy with the alarm giving out a warning when the alarm reaches the end of its life.

Which? advise choosing a carbon monoxide detector from a brand that is widely available from shops such as Argos, B&Q, Currys, John Lewis, Homebase, Screwfix and Wickes – established big firms like these only stock alarms from well-known companies. Expect to pay around £20-£25, cheap alarms are available online for under £10 can’t always be relied on to detect carbon monoxide and to sound the alarm.

Andy Oliver, Managing Director at Stevenson Heating Ltd also advise: “The Gas Safe Register recommends the use of audible carbon monoxide alarms. It should be marked to EN 50291 and also have the British Standards’ Kitemark or another European approval organisation’s mark on it. We are based in Bromley and supply and fit the leading brands such as Honeywell or Fire Angel, which are both rated at and above the relevant standards.

“The recommendation is to fit an alarm in each room with a gas appliance. When doing so, you should always follow the alarm manufacturer’s instructions on siting, testing and replacing the alarm. Also, don’t forget that it is important to choose an alarm that will wake you up if you’re asleep, or you may not be aware of early CO symptoms until it is too late.”

Melanie Dennis, Owner of property management business, Domain and Co, advises that to ensure the reliability of the appliances in your investment property, you should have a preventative maintenance strategy. Some detectors should be checked and maintained annually, though other appliances such as gas heaters, air conditioners and ducted vents need to be maintained biennially (ever two years).

WHERE SHOULD YOU PUT YOUR ALARM?